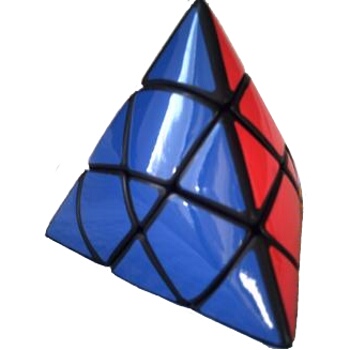 Above: Version by Aleh Hladzilin

Click a thumbnail to see its larger version and description.

A 3x3x3 in shape of a Reuleaux tetrahedron.

This variant has a long story. The first sample was presented by Aleh Hladzilin back in 2006 when the community discussed about a work-in-progress by Hidetoshi Takeji. From this first presentation steems the first image shown here. Aleh gave this puzzle the name "CONVEX PYRAMID" but this was subsequently forgotten like his variant itself.

Maby it was due to its strange presentation but nevertheless the variant was subsequently forgotten until the white variant shown here was presented in 2008. This was one of the collaborations between Adam G Cowan and Frank Schwartz. Adam G Cowan designed the pieces. Frank Schwartz ordered some 3D-printed masters, polished them, casted the pieces, assembled and stickered the puzzle, including the builder's signature letter. See image 3.
Because of the rounded shape the puzzle is way smaller compared with the mastermorphixes seen before.

In 2009 Mefferts started to mass produce this puzzle under the name "Master Pyramorphinx". It came with black or white bodies and even a version with monochromatic stickers. See image 7.
Edge length: 62 mm
Weight: 81 grams