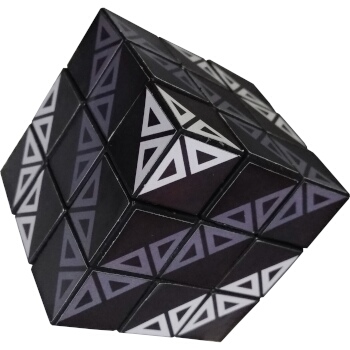 Click a thumbnail to see its larger version and description.

A cube with white and gray triangles laid out in diagonal stripes around the puzzle.

This layout is very similar to the layouts of the 4-colour Cebra cube by Antonio Rodriguez Perez and the Armageddon Cube by Fabio Causarano, although both of these cubes use several different colors around the puzzle.

Version 2 also uses the same layout but it incorporates more small triangles and filled up the blank spaces. Some of the concentric triangles are formed with smaller triangles with the same shade of gray but some are formed by alternating pairs of white and gray triangles.

Contributors
Thank you to the following people for their assistance in helping collect the information on this page: Anele Biscarra.
Collections
This puzzle is found in no registered member collection.

Found a mistake or something missing? Edit it yourself or contact the moderator
join » login » Community